This morning as Ambuya was feeding us animals in the kitchen I snapped at Mouse cat...broke her neck and she slowly died in Mum's arms. She is Mum's last animal link to the farm. She was born in a 20 litre tin at the workshop on Erewhon during November 1995. Mum felt sorry for her workshop cat and kittens and brought them all to the house to live. She kept Le Shat and two of her kittens. Mouse cat spent the next 16 years with Mum wondering from one house to another as they moved. When Mum went down to the barns late at night to check on the barn boys and make sure the barn temperatures and vents were all correct, Mouse used to follow her diligently to help check. When they moved from the farm to town, Mouse learned to live in the limited space she now had to live in. She also became accustomed to avoiding the huge cane rats at the bottom of the garden. When we moved again to Shenstone, she adjusted to more space but kept close to home. As the years passed she became more and more of a house cat. But of course I love chasing anything that moves. I like intimidating the cats and other dogs and so Mum often has to reprimand me and remind me that SHE is top dog...
So today, when I snapped, Mouse was in the way...and not fleet enough to escape to the top of the freezer...and so I sat and watched Mum hold her precious cat in stunned silence as she slowly died....
Mouse has been buried in the bottom of the garden with all the other pets who have passed on to better places over the past 8 years....
...and Mum is still just stunned...not really realising that her precious friend has actually gone...

with head hanging low, and shadowing my Mum diligently...

till next time,
Musole
Posted by Simply Simon at 6:48 AM 5 comments: 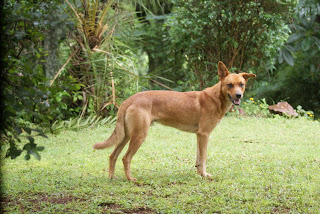 Posted by Simply Simon at 5:39 AM No comments: 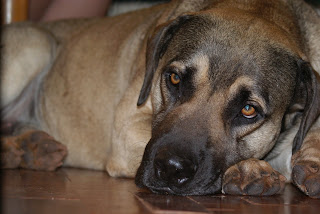 Good Day all.... jees so sorry I have not been keeping up with you all. Its been busy! Mum has inherited another canine who really needs discipining! Rocket and I have this game we play...we chase the cattle and the horses around the lawn... try really hard to swing on their tails....boy! Do we get into trouble for that!!
We have had a very moderate summer... not too much rain so its green but not full of moss like our normal summers.
Mum is concerned about politics as always. People are really stressed by the possibility of ANOTHER election and violence to go with it... so many elections since 2000.... seems like we just get over one and go straight into the next! Life is still tough here in ZW...people battle to find work and businesses are still closing down. Where is it all leading??
Thoughts with you all. Will try and get onto your blogs to catch up with you all again!!
Barks
Musole!
Posted by Simply Simon at 5:26 AM 1 comment:

Hello out there...its been a very long time since Mum and I have been on line and blogging. The last 6 months in our beloved Zimbabwe have been fraught with difficulties. The Indigenisation Act has had huge ramifications which have impacted on all levels of society. The Government of National Unity has had difficulty in coming to agreement on anything...economic or political. We now seem to be heading for another election and the possibility of political instability again.
In the mean time us animals have quietly gone about our business catching rats and bats and eating all sorts of things that Mum has a heart attack about. The cattle get fat. The ewes lamb down. The community stays together.

This spring has been beautiful with all the trees in full flower... the jacarandas, flamboyants and so many many plants blooming.

The countryside however continues to look bleak and uncultivated as the battle of the giants keeps going and the earth gets scorched in the process.

One day sanity will prevail and we will look back on this period of our lives with amazement!

Till next time
lots of licks
Musole.
Posted by Simply Simon at 9:54 AM 2 comments: 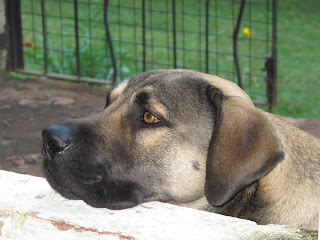 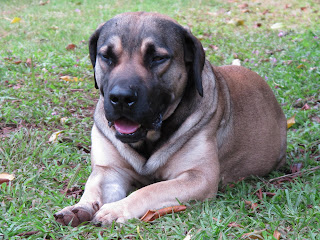 Wow, thank you all for your amazing support. Its been a long hard 6 months but with your support Mum says she will keep me writing...sigh, my writing...but I promise, I will try!!
Mum arranged for me to become the dad of a litter of Boerbul pups so yesterday I was practicing with the lady who came to visit. Now we wait patiently for the next few months to see if and when our babies will be born. I did so love bringing up the lion cubs that were sent to me by the park in 2008 so it will be great if I can have another little pup around for company soon.
Mum has been really busy recently. Over 30 years ago Zimbabwe became independent from their colonial parent and we began a new journey of freedom for all races. For years our leader told us all that we were welcome and we were all Zimbabweans. Then in 1998 our leadership decided they needed to change the land ownership patterns in Zim. Over the next 10 years we have had a huge social upheaval here with over 4 million people leaving their home country in search of a safe place to live. Families have been split up with people moving into the Diaspora...children left behind with grand parents and family while parents have left to find work to be able to support their families. Many thousands of farm labourers have been displaced from their homes and have lost their jobs. Fod security has been lost.
In February 2009 after nearly a year of negotiation, a Government of National Unity (GNU) was formed and we thought we were moving into a new era of development. Over the past year the members of the GNU have continued to negotiate to find a power balance with some success. A month ago the Ministry of Indiginisation promulgated regulations which effectively deprive all non "indigenous" Zimbabweans from owning their whole business .... they have to hand over 51% of their businesses to an Indigenous Zimbabwean.
Sadly this means that people like mum, whose families have been in Africa for over 200 years, as well as those of her friends who have families that came to the Cape in 1652, and who are classified as Non Indigenous Zimbabweans (NIZ) by virtue of the fact that they were part of a privileged class prior to 1980, will NEVER be classified as an Indigenous Zimbabwean and so they will never again be allowed to own their own businesses. There is a list of businesses NIZ cannot own, including agriculture, and agricultural land. Mum's family have been farmers in Africa for over 200 years! If they fail to hand over 51% of their businesses to an Indigenous Zimbabwean (as per a list of recommended recipients available from the Ministry) then they will be jailed for 5 years.
Mum's family have NO links to Europe or Asia or the Americas. They have been Africans for so long that the links that may have been there are long gone.
licks and growls till next time
Musole

Dear all, thank you so much Carol and Jo for jogging Mum and I to write on our blog again!

Its been a while since we wrote in October and since then Cody, Mum's trusty shadow ridgeback, has passed away. While Mum was away over Christmas he wondered off into the garden and died quietly. He was 14 and so he had been getting weaker and weaker.

Mum got back early in January and Jackie, her trusty weimaraner who had been her other shadow for 15 years became very ill, stopped eating and slowly faded away as mum slept next to her for two days while she moved on to her next assignment. She had been a wonderful companion to Mum from the moment she was collected from her litter family and brought to the farm to start her new life. She was missing a piece of her ear from a fight with a wild pig, had a scar on her nose from a bite from a cane rat. All those happy and sad monents of their joint lives passed through Mum's thoughts as she sat with Jackie through the last days of her life.

Since then we have been coping with all the economic and political trials that being in Zimbabwe have brought to us.

I did have a growl at mum when I snapped at her face when she was checking a hole caused by a cow horn which had gone septic on my leg on 10 January. Accidentally I caught her face with my teeth and made a few holes in her right cheek and lip... she has healed soo fast and so well though. I have not left her side for a minute since it happened. I was mortified that my grumpy growl had actually caught her cheek. Her daughter Helen came over and quickly put butterfly stitches on her cheek and lip after disinfecting the bites. Now she just looks like she has a few more smile lines!

Its strange only having three canines in the house now! Misty, Lily and I bounce all over the place, sniffing and chasing things as we go for our daily walks with Mum. I still chase the horses away when they come to steal my food at the back door near the kitchen. I still growl at the ducks who also seem to think they can come and eat my lunch! I love teasing the young calves but Mum gets really angry with me....so I look longingly at the beautiful little lambs as they frolic next to their mothers in the pastures.

licks and barks
Musole
Posted by Simply Simon at 3:28 AM 9 comments: