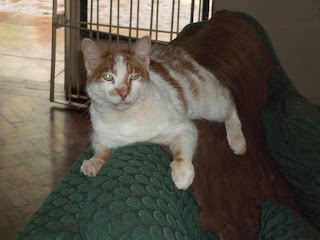 In 1996, when Mum was still a tobacco farmer in Raffingora, two little kittens were born in the linen cupboard in her house on the farm. Spot and Ginger soon took over the house and made it their playground. As the years went by and they watched Mum walk to the barns to check the Tobacco curing at night, they slowly became brave enough to wonder down to the barns with her on her daily rounds. They loved each other dearly and were inseparable. In 2002 when Mum was forcibly removed from her farm and had to leave with only the clothes she was wearing and the truck she was driving, the cats as well as all the other animals had to stay behind. For months Mum tried to get back to her farm but eventually realised that it was not going to be possible and so she settled into a little house in Harare where she went about trying to build a life again. She started from scratch again...pots, pans, plates, linen, furniture...all these things had to be found and put into her new home. On many occasions Mum would think...ok, I have got....and then remember...

As soon as she was able to do so, Mum arranged for a friend to go onto her farm and rescue her dogs and cats.....Le Chat had gone bush and was not to be found, but Spot, Ginger, and Mouse were still roaming around the house, where some staff were trying to keep them fed. The four dogs too, were foraging and were found and loaded onto the truck for trans-location to their new home in the suburbs of Harare.

Mum says she will be back... its a long story.
Lots of love
Musole.